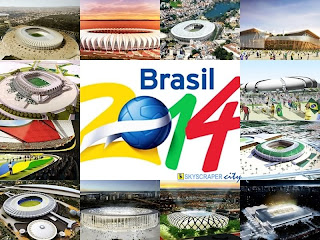 After finishing a three week Diversidad de la Gastronomía unit, and having 5 days before vacation (one of which I was going to be out of school running the Boston Marathon), I decided to do a mini-fúbol/copa mundial unit. I have done this unit before, but usually have more songs and spend a longer time on it. I hadn't planned on doing it because I thought some of the songs might be outdated, but the familiarity of one of the songs, Waka Waka, and the style of music of the other, Grito Mundial, made it engaging for the students. It was also the perfect feel-good music that we needed this week. Although I was only there for three of the days and did not teach it the way I normally would (because of being in a complete daze the entire week because of what happened at the marathon), I thought I would share it here.

These are the essential questions for the unit (unit packet here):

The focus of this unit was on these two songs:

Before delving in to the songs, students investigated the World Cup, answered questions about sports related songs in our culture (comparisons!), and looked up information about Shakira and Daddy Yankee (see unit packet p. 2-4 & 16 ). We discussed all of this information in class as well. Then, students did a cloze activity and we talked about the videos. We also did some analysis of the song lyrics and the videos. (see unit packet for questions, some from a Zambombazo/Zachary Jones wksht.). (Students translated the songs too (gasp), but I think I am finally going to move away from doing that!)

The songs have a lot of similarities and differences. They are both related the la Copa Mundial and the videos both feature soccer players. Both focus on the unity that is created by la Copa Mundial. Waka waka is directed mostly at the players, while El Grito Mundial is directed at the fans and the world. There are many others as well.

There are other things that can be extracted/learned from El Grito Mundial, particularly from the video, such as what reggaetón is and where it comes from. We watched this video from the PBS series Latin Music USA. Students also learned about capoeira, which is featured in the video, by watching an excerpt of Black in Latin America: Brazil: A Racial Paradis? (Capoeira description starts at 8:25). We also discussed what carnaval is and what it's roots are.

And, although I didn't use La Vida Tombola by Manu Chao this year, I have used it in the past (see other unit packet p. 18-25). The students have not really liked the song, but I use it because it is a good one to compare and contrast with the other two songs. And I am fascinated with Diego Maradona and love Manu Chao! These are some of the other things that students can learn when using this song:


This is an exam that I used last year for this unit. I would revise it a bit, but thought I would share it.

There are so many other fútbol related songs! Here are a couple other resources to check out to find some of them:
Do you have a favorite song about fútbol that you use in class? Have you taught about la Copa Mundial? If so, please share! I am really looking forward to having some more material as we get closer to La Copa Mundial 2014 en Brasil!

Another good song to maybe add (Thanks to @spanishplans for suggestion!):

A couple of fantastic commercials to use with this unit, perhaps to introduce and start the unit??

Update 2/15/16 - I have changed this unit a bit by omitting the commercials and adding a movie and a few other songs. Click here to see the resources and a link to the new unit packet.

After having just finished a pretty heavy, somewhat depressing unit about La Narcoviolencia in México. I decided that I need to do something uplifting, light and fun.

So, I took Cristina Zimmerman's lead and decided to do a unit about La Diversidad de la Gastronomía with a focus on Mexico, Peru, Argentina and Spain. (unit packet here) We spent about 3 weeks on the unit.

These are the essential questions for the unit:
The first day we did the Zambombazo activity called Vine Vi Venci: Abecedario de comidas. There is so much culture in those videos! It was a great way to start the unit.

Since the units in my Cultura y Civilización class all have music in them, I decided to use two Lila Downs songs to start the unit. We focused on México to start and used these two songs with the amazing music videos --- lots of culture just in these videos! From the songs and music videos, students explored and learned about a variety of things including: mole, la importancia del maíz, mezcal, Oaxaca, Montealban, los Zapotecas, chocolate, geografía, y una variedad de comidas.

Before watching the video for La Cumbia del Mole, students watched this video: Mole Michoacano con el Chile Mayor for homework and tried to write down as many ingredients of mole as they could. The video is short, so they had to watch it 3-5 times.

Some of the other authentic resources related to Mexican food that students saw were the following:
This was the first (basic) assessment of the unit.

After spending six days on Mexico. We switched gears and starting looking at Peruvian food. We started by looking at this infografía: La riqueza de la gastronomía peruana en cifras. Students made a list of the top 5 foods and the top 3 drinks and then made Google Presentations describing the foods. The next day they viewed other classmates' presentations, read the descriptions aloud and said what food it was. Here is an example of one of the presentations:

Some other authentic resources related to Peru that students saw were these two infografías:
After Perú, we used this funny commercial to transition from Peru to Argentina. It was a great way to talk about accents and cultural perceptions of different countries.

Students investigated Argentine food and this is what this slideshow helped guide them after:


Next, we watched these commercials and did this worksheet and this one (from Zambombazo). (along with a few speaking activities related to the commercials).

Students then investigated Spanish food and this is what this slideshow helped guide them after:

We are finishing the unit tomorrow and we will use this commercial and worksheet.


Another thing we did during the unit was EAT and DRINK. Students had yerba mate, inca kola, jamón, arroz con frijoles, dulce de leche, olivas, and chocolate con chile.

This is the final assessment for this unit. This was a successful, engaging unit and I think it could be broken up in to 2 or 3 units, particularly the Mexico section!

What are your favorite authentic resources for a food unit? Please share