Global Citizenship in Spanish 1... or any level!

Before I talk about Living on One Dollar: Change Series and Kiva... I want to share a little bit of information about Global Citizenship Education.

Here is a quick definition from Wikipedia:

And here is a screenshot from UNESCO's Global Citizenship Education initiative: 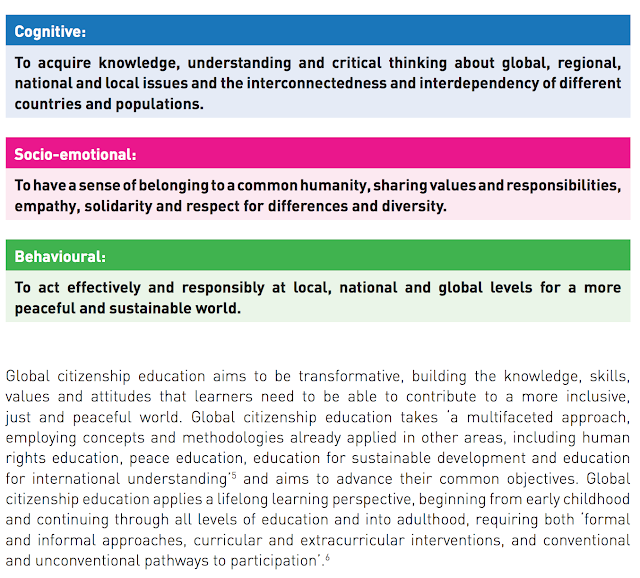 I think I usually do a good job in many of my units, at all levels, with the Cognitive and Socio-Emotional dimension of Global Citizenship Education, but not so much with the Behavioral dimension. That is something I want to get better at!

But this unit (which could be done in any level!),
with the culmination of Kiva,
really addresses all three dimensions of GCE!

I have blogged about using Kiva with my Spanish 1 class after the "school unit," specifically after the story Irene (with Elena López's resources). But this year, I decided to use the Living on One Change Series before the Kiva project.

The Change Series is similar to the documentary Living on $1 (on Netflix), which I have used in the past, when we basically just watched it and talked a bit about it. But this year I did something different.

There are eight episodes in the Change Series and Eric Herman wrote up (and shared for FREE) a summary in Spanish 1 for each episode. We did the readings before each episode and then watched the episode. Here are a few ways we did with these readings:

He also created the presentation below with screenshots. Somehow I missed this in the folder, but I will use this to help review!

This unit is also accompanied by the song "Si quieres, puedes" (which shows the good things that Sebastián Yatra is doing to help people!) and will be followed up by our Kiva loan. I have $255 to loan. So far, my classes have leant to 9 different people, so I will share that information with them too.

Big thanks to Eric Herman for creating and sharing all these resources!